This time last year I was in such a different place in my writing career. I had 2 short stories (The Rookie and XXXMas Ale—part of the Brewing Passion series with Breathless Press) published. I had a novel I offered in free, serialized form on my blog and I ran the beer bar I’d just opened along with my microbrewery in Ann Arbor. I was one tired puppy, what with all the opening, cleaning, pouring, talking, cleaning, closing and starting all over again.


By March we had made enough money to hire more help.  About that time my publisher saw the novel on my blog and asked me for it. But I had to make it into a “choose your romance” story since the heroine had so many great man choices, we thought it would be fun to let the reader decide who she “got.”  Fun it was, also excruciatingly difficult and time consuming.
By June I had turned that in and awaited first edits.  I also had the kernel of an idea for another beer-based story intrigue romance, Cheeky Blonde which I wrote, got cp’d and subbed by July 4. That story was purchased by Decadent but not after a few rounds of tears and rejections from others.

I had an idea for a ménage romance based on a difficult married couple, and an infidelity that ends up bringing them closer, with the addition of another guy. Vegas Miracle is probably one of my favorites (Rebel Ink Press.) I like challenging characters that are not always likable but are always redeemable.

In July I wanted to try my hand at Decadent’s 1NightStand concept. I’d never written anything to a specific “formula” before and wasn’t sure I wanted to but I did and “Caught Offside”, a very hot soccer player based love story was released this past week as part of that series.  Interestingly enough, within about a week of getting that accepted, my muse kicked into seriously high gear and blind sided me with a new concept: The Turkish Delights trilogy, also part of the 1NS series sprang nearly fully formed from my head onto the screen over the course of about six weeks. I had so much fun with it—as Hans (my muse has a name and wears lederhosen over his shirtless six pack abs) dragged me all over the place outside my previous comfort zone. It consists of a cougar story (I love those), a tragic m/m (one of my best sellers now) and a BDSM one.

The publisher loved these so much they requested and got “more” in the form of a prequel (The Diplomat’s Daughter, the story of Emre, Tarkan and Lale’s parents, a near 40k word novel) and a wrap up novel that brings back a beloved character at just the right moment to screw everything up, after we’d all gotten over him. Flower Passage: Tarkan’s Story grabbed me in a choke hold in November and I wrote its near 35k words in about a week.
You’d think Hans took writer Cialis or something wouldn’t ya?
And there’s more. I have a new brewing based ménage novella about to be subbed after getting an R&R on what started as a “quickie” but I’m told needs “more.”  Wish me luck.
Plus, it was just announced that my series of hot Realtor stories will launch a new line of erotic romance for Tri Destiny Publishing,  a new kid on the e pub block.  I’ve gotten to know the owners/publishers and based on her advice have taken what was a hot, but vanilla set of stories in a completely hot new BDSM direction.  These 3 novels span nearly 10 years in the lives of 3 folks falling in and out of lust and love with each other, with a tinge of bondage and spanking and finally, deep emotion.
So for 2012 I have a looooooooong (long) line of editors waiting for me.
I’ve tried to stuff Hans into an empty keg or plant him in the corner with a growler of beer to keep him busy. But….being that naughty boy that I love, I’m already noodling another soccer story. An m/m between a Spanish experienced player and an American rookie who is in denial about his true self who meet as teammates for the Las Vegas Black Jacks, coached by our own Ramon Castillo of Caught Offside!
And there is that killer time travel (paranormal being the only remaining area I want to explore for myself) with the uber hot German brewer in the early 1900s who finds a gorgeous woman passed out on his lagering cave floor, who thinks she’s on a brewery tour in 2012.  Yummy.
Now if you will excuse me I must go put a cold washcloth over Hans’….um…forehead.
I’ll offer one of my back list books for one commenter---tell me how you deal with an overactive muse! 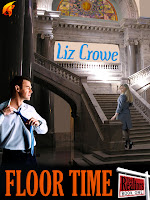 Here’s a FIRST LOOK at the blurb for FLOOR TIME: The Realtors Book One!

At age thirty five, he's made millions as a top-selling Ann Arbor real estate broker and has the right connections to close a deal by any means necessary. With his rugged good looks and compelling personality he has a virtual black book most men would kill for and he uses it often, never settling for one woman for very long.
While his D/s past is buried, exactly where he wants it, an undercurrent of boredom and dissatisfaction runs through his life now. A disastrous experience years earlier made him swear off the whole scene, but the more Jack suppresses his natural Dom, the more his frustration grows.

Sara Thornton, just a rookie in the field, has fast-tracked herself to the top of the Ann Arbor real estate market. Her life is disciplined and focused, exactly what she wants. But as her career takes off, the fulfillment she seeks remains inexplicably out of reach. The one thing she knows for sure, she will not join the Jack Gordon groupies in her company, no matter how tempting that might seem.

A chance encounter, then a difficult transaction, throw Jack and Sara together and the sparks fly high and hot and often. Forced to confront the compulsions that gain momentum with each sizzling encounter, their relationship seems to spiral out of control until Jack finally admits what he needs, and shows Sara what she's been missing.

You can find out what Liz is up to on her blog: www.brewingpassion.com, and her website: www.lizcrowe.com (which is currently under construction). She is Liz Crowe on facebook, and beerwencha2 on twitter (and she's on there a LOT)!
I'd like to thank Liz for stopping by to visit and for the generous offer of one of her back list books. All you have to do is leave a comment on dealing with an overactive muse to be eligible. So, what are you waiting for? Go comment! :)
Side note: Caught Offside is next on my TBR list - Hot soccer men are yummy ;)
<3 Laci
Posted by Laci at 5:29 PM