Here is the entry that won the BEST SCENE award over at UPAuthors Erotic/Romance Contest!

Footsteps headed back in her direction and hands softly rubbed her ass. “I’m going to use a flogger on you, cutie. Remember your colors. Here’s what it looks like.” Master Jonathan held it in her line of vision. “It’s good for beginners since its suede and soft, and I’ll go easy.”
“Okay, Sir.”
He swatted her butt with it a few times gently. Somehow it was too soft. She wiggled her hips wanting more. The touches on her skin came harder but still didn’t hurt like she thought it would. A few thuds on each cheek, and one in the center of her sex caused the over sensitized feelings to ripple through her body. Jonathan continued his rhythm until she whined in bliss.
On her other side, the bed sank down under someone’s weight. She saw the blindfold at the same time it went over her eyes and the world went dark. Two sets of hands lifted and placed her on her back in the bed.
She felt the flogger tendrils gliding softly all over her body. A cold chill ran through her and she involuntarily shuddered. She didn’t know who was touching her, and she didn’t care. Her body started to feel things. Good things. Her heart pounded in excitement, her stomach fluttered, and her pussy throbbed in anticipation.
Someone reached down and pinched her nipples hard through her bra. She didn’t move or breathe. Her nub responded instead, silently begging for attention.
“Color?” Master Jonathan asked. “I can’t tell what you are thinking. If you like this, your body isn’t telling and I’m hearing nothing from you. You can moan, in fact, it’s encouraged, but no talking unless spoken too.”
“Yes, Sir. I’m at green. It feels good, and I’d like more, please.”
He chuckled as did Master Jay. “Very well.”
The flogger focused on her breasts, first moving slowly and sensually over the thin fabric of her bra. Her nipples hardened after a few passes, and they became even more sensitive. She whimpered.
“That’s it, little one.” Master Jay encouraged.
If he liked to hear her, she would do it for him. She was at his mercy, whatever he wanted she would give.
The flogger lifted and slapped down on her chest, putting a little bite on her hardened peaks and the mounds spilling from her bra. She moaned louder and the flogger came down harder and harder, and then stopped.
“Green.” She whispered into the silent air.
The flogger traveled up and down her body in small quick soft swats.  Finally it landed on her sheer panties and stroked over and over on her neatly manicured mound. The flogger lifted again and slapped down on her pussy and her nub responded with a jolt of pleasure shooting through.
She let out a rasping groan. The scent of her arousal filled the air, and she felt like she should be embarrassed, but her body wouldn’t allow it. It craved more.
She wanted to press her legs together to put pressure on her nub, but the bar prevented it. That somehow turned her on more, and her clit throbbed like never before. She wanted to cry from the extreme jolt of need she experienced.
“You like that,” Master Jonathan stated. “I can tell.”
As he continued to flog her pussy, Master Jay’s hands rubbed silky fabric over the swells of her breasts. The fabric then followed her body down her to stomach and along her legs. She let loose, moaning freely, allowing the emotions and the sensations envelop her. The silk continued to travel as the flogger danced all over her body.
The two at the same time pushed her over the edge and she came, and screamed, “Yes, Sir. Oh God, yes, Sirs.”
“So beautiful,” Master Jonathan whispered hot in her ear.


Laci is a girl's name (also used as boy's name Lacey), is pronounced LAY-see. It is of Old French origin. Nobleman's surname carried to England and Ireland after the Norman conquest. Lacey and its variants may also be used in reference to lace, the delicate fabric made of netted thread, hence giving it a feminine connotation.

Laci is not my birth name though, it's my pen name =) How did I come up with the name Laci Paige?
I made a list of girls names I liked, I wasn't even thinking of a last name at that point. This was part of the list:

As I read through the list when I said Laci Paige I just like the way that sounded, and went with it! So now you know!

What is the craziest thing you have done? Probably sex on a roof top. It was scary and exciting at the same time. The roof was not accessible we had to do some serious climbing to get there.

Do you believe in aliens? Some days I do. I am iffy on that one.

Have you ever seen a ghost? I was young and I saw something, but I really don't know for sure that's what it was.

What vegetable do you hate? I LOVE all veggies - really! 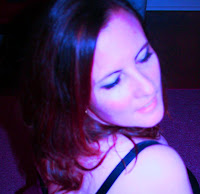 Laci enjoys spending time with her family more than anything! She and her husband support their children on the soccer pitch and off. Laci enjoys the outdoors, and of course reading and writing (and chocolate). Their family lives in Hampton Roads with one cat.