The Replacement, by Justyce Rayne 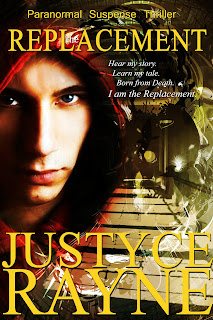 The blurb for The Replacement

...To save a life, one must be willing to open their eyes to what it truly means to die...


The task of the Replacement is to uphold that very idea. Keep quiet, do your job without any hiccups, and the Council will remain ever you ally.

For Jackson McFlaurey, this should have been simple. A predictable, first time assignment as a rookie Replacement. Unfortunately, he'll learn, even in a world of balance there are no absolutes and betrayal to the powerful Council will have him fighting to survive.

Only...
How can Jackson win such a challenging battle to sustain his humanity when he's already given his soul to Death?

Death…known throughout eternity as the Dark One,
the Grim Reaper, the one for whom the bell tolls. For many
eons he‟d been distraught over the increasing number of
lost souls. Therefore, Death went to request an audience
with the Higher Beings known as The Council.

His hope was to be allowed to gain a spirit's possession
before their predestined time of departure. The cold one
pleaded his case with the emotions of one who‟d grown
weary of the struggles he faced on a daily basis. He no
longer wished to watch the suffering that only a lost soul
experienced.

After a long deliberation, the Council of Universal Law
approved the change within the original Documentation of
Mortality and bestowed the gift of early soul removal to
Death.

Little did he realize how heavy of a workload he would
have and when the recent death tolls of those aged fourteen
to fifty increased, he knew he needed help. Not only that,
but when the bodies separated from their spiritual energy
they would decay within a twenty-four hour period, leaving
many instances of unexplained phenomena for the living.
The Council then created a compromise to maintain the
physical form until its natural end was conceived.

Hear my story. Learn my tale.
Born from Death—I am the Replacement.