Spotlight - One Night with the Groom, by Sara Daniel 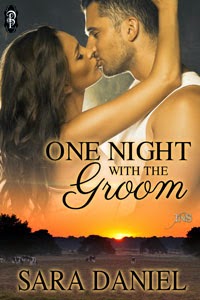 New Release Spotlight – One Night with the Groom
By Sara Daniel

Meanwhile, the poor jilted groom has been twisting in the wind since his bride left him a year before. Fear not! He’s about to meet up with the woman from his past who still holds his heart captive, despite him spending fifteen years trying to forget her.

One Night With the Groom
As if trying to save the family farm and pay her mother’s medical bills isn’t enough struggle, Luciana Cortez discovers her brother has used the last of the mortgage money to buy her a one night stand. Even if she wasn’t appalled at the prospect, her farm chores leave her too exhausted for sex. The silver lining: she’s also too busy to think about the man who’d once pledged to marry her then abandoned her.

Working on an important business deal, CEO Blake Wellington doesn’t think twice when he steps out of the limousine…until the car leaves. Instead of the business he needs to attend to, he’s on the doorstep of the farm where his past love Luciana lives. Without cell phone service or transportation, he must rely on her for help, a move that threatens to awaken his long-dead emotions.

As they attempt to gain closure over the ache and secrets of their past, neither are prepared for the onslaught of emotions that jeopardize everything they’ve worked their whole lives for. When the night is over, they must heed their responsibilities and go their separate ways, even if it means a lifetime of heartbreak.

EXCERPT:
“Blake.” Her heart bled as if she’d stabbed it with a pitchfork. She dropped her hand from her stomach to her side. “What are you doing here?”

“I haven’t the foggiest idea.” His lips curved in a crooked smile.

Aching to wrap her arms around him, to kiss his sexy mouth, to soak in his presence while grinning at him like a fool, she took a step back. She might not be hallucinating, but his sudden appearance had the power to drive her over the edge of insanity and longing. Her heel caught on the threshold at the opening of the barn, and she stumbled.

He reached for her, but she steadied herself on the doorframe, holding out her other palm to ward him away. She couldn’t handle seeing him, let alone skin-on-skin contact.

“Give me a minute,” she begged. “I’m kind of shocked to see you.” Kind of, ha. Completely would have been an understatement.

“I don’t know yet.” The dead tree beside the barn creaked in the wind. She’d let her fear over it falling on the barn or, worse, in the other direction keep her from cutting it down, but the nasty gusts made her regret the decision.

“Keep me posted on which way it goes. I’m already skittish about getting shot at.”

“You won’t be unless you touch me, in which case I’ll shoot you myself.”

“Fair enough.” He pocketed his hands and stepped back.

The distance helped. So did the fact he didn’t call her bluff. Luciana’s limbs shook too much to pick up any weapon. At one time, she’d been furious with him for abandoning her when she’d needed him most. Although he’d bowed to her parents’ pressure and hadn’t fought to save their future together, her emotions had faded to regret and resignation.

“So, you decided to drop in after fifteen years without a word, and you don’t have a clue why?” Okay, maybe her anger hadn’t faded.

“Ouch. Thanks for being straight with me, rather than sparing my ego. I think.”

He winced. “I didn’t mean an insult. I’m supposed to be in Des Moines to consider a potential property for my company to add to their hotel portfolio. But the limo took me here instead and then left me.”

Limo. Hotel portfolio. If he hadn’t been out of her league before, he’d traveled far beyond her social realm. “So, are you one of those ‘if I build it, they will come’ visionaries?”

“No, I’m a market-feasibility, make-sure-every-aspect-is-viable-before-I-sink-a-penny-into-it type of executive. I don’t have a reason that makes any sense for why I showed up here, and my cell phone isn’t getting reception. If I could borrow your landline to make some calls, I’ll get out of your hair as soon as possible.”

He hadn’t come to see her. He’d arrived by mistake and wanted to get far away without further ado. Once upon a time, they’d shared a rare, special love. She remembered it and regretted losing it, even if he didn’t.


a Rafflecopter giveaway
Posted by Laci at 12:01 AM