The Book Is His. His Alone. 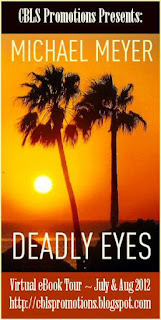 I am happy to host Michael Meyer today as my guest! See how he feels about self publishing...


People often ask me how I decided to self-publish my own novels. The answer is simple, and yet there is some complexity to it. I wanted my work to be read right away. If I had gone the traditional publishing route, DEADLY EYES would still be somewhere along the lengthy publishing route, lying there not yet ready to be put into readers’ hands. It takes months, sometimes years, to get one’s work published the traditional way. I am so delighted that Amazon Direct Publishing came onto the scene. DEADLY EYES has already sold hundreds of copies since its birth at its new home on Amazon Kindle in March of 2012. And in that short time, this international thriller has made me an international author. Copies of it have already been bought in England, Germany, France, Australia, and Singapore, in addition to wide distribution throughout the United States and Canada. In addition, DEADLY EYES is also now available in paperback on Amazon. None of this would have been possible, in such a short time, if I had chosen to pursue the traditional publishing route.

F. Scott Fitzgerald, the highly acclaimed international author, often complained of having to change parts of his books, especially endings, to satisfy his publishers. He is not, by far, the only author who has had to adhere to someone else’s editing in order to be published. In my case, the case of a self-published novelist on Amazon Kindle, I have complete control over every single aspect of my book, every word, every punctuation mark, and even to the appearance of the cover. It is my choice, and mine alone, how to begin and how to end my own book. I have complete control over all of my characters’ actions, thoughts, and words. In a nutshell, as a self-published author, I am the true writer of my own work. No editor has had a hand in changing even a single word of my original work. The book is mine, and mine alone, and it is presented to the reading public exactly as I want it to be, nothing changed to satisfy a publisher’s whim.

Yes, Amazon Kindle Direct Publishing has been a real godsend to me, and my Caribbean thriller DEADLY EYES is proof of that.

“DEADLY EYES” is a semifinalist for The Kindle Book Review Best Indie Books of 2012!!
http://thekindlebookreview.blogspot.com/p/mysterthriller-semifinalists.html

Blurb:
A HAUNTING CARIBBEAN MYSTERY
James Cuffy, better known as Cuff, is living in paradise with his girlfriend, on the small Caribbean island of St. Croix, where the sky is as blue as Cuff's eyes, the ocean as pretty as Rosie's cheeks, where the gentle lapping of the waves is a lullaby, and the swaying of the palm trees is a dance. The sandy beaches are as white as sugar, and the horizon is a world away. St. Croix indeed is paradise, the perfect place for living, laughing, and loving.

But the sandy beaches and the turquoise sea can provide no cover from the deadly eyes of the unknown stalker pursuing Cuff. Murder leads to murder as he attempts to untangle the terrible web in which he has suddenly become entangled.

The twists and turns are relentless, the roads of the fast action leading in all directions, but time is running out, and Cuff, his faithful Rosie at his side, knows it.

Excerpt:
These were not naked eyes, for the distance between these eyes and the beach bar at Cathy’s Fancy was too great for the naked eye to discern who was who. No, these eyes had planned meticulously. The eyes were glued to a pair of terribly expensive and unbelievably powerful Swarovski Optik binoculars. The balcony on which they now worked, taking in the scene before them, was the perfect place to see but not be seen. The powerful binoculars saw to that.

The distance, the palm trees, and the rays of the sun all helped. The position had been hand picked, after careful consideration. Every angle had been considered, and, one by one, they had all been discarded for one reason or another until this very spot, the perfect place to observe while not being observed, had been selected.

Yes, the eyes had seen it all. The eyes had seen precisely what they had hoped to see. They were like a master puppeteer.  They planned, controlled, and observed, but from a safe distance. They did not miss a trick.
The eyes. The deadly eyes of St. Croix. 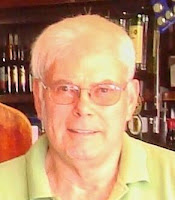 About the Author:
I have resided in and have visited many places in the world, all of which have contributed in some way to my own published writing. I have literally traveled throughout the world, on numerous occasions. I have lived in Finland, Germany, Thailand, Saudi Arabia, and the U.S. Virgin Islands, on the island of St. Croix, where DEADLY EYES is set. I gained the wanderlust to see the world, to experience other cultures, at an early age, and this desire has never left me. If anything, it has only gained in intensity as I have aged. I try to travel internationally at least once a year. In the interim, I spend lots of time traveling around both my home state of California and other nearby states.

I spent my early years in the small town of Lone Pine, California, the home of almost every western movie, in addition to a wide variety of other genres, made in the 30’s, 40’s, 50’s, and 60’s. In fact, Hollywood still films parts of big-time movies there today. My dad, the town’s lifeguard at the time, personally knew John Wayne, Lloyd Bridges, and Lee Marvin, all of whom came to the town’s pool, the Memorial Plunge, at times to cool off after a hectic day of working in the sun. I was even an extra in a movie filmed there in 1957, MONOLITH MONSTERS, a B-cult favorite even today. I was ten years old at the time. Even though I resided in a small town hours from the big city, I was exposed to the excitement of action and heroes at a formative age, and, thus, my interest in writing novels of suspense such as DEADLY EYES was born.

As a recent retiree from a forty-year career as a professor of writing, I now live in Southern California wine country with my wife, Kitty, and our two other cats.