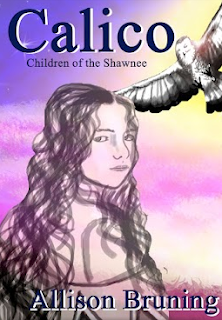 This week on the TTC virtual blog tour, were were asked to include a passage from a novel we had written.  Here is a brief synopsis of Calico, by my spotlight guest author this week, Allison Bruning:

A haunting prophecy has been cast against her. In a harsh world deep within the western American territories of Ohio and Kentucky, French Duchess Calico Marie Turner must learn to survive among the Shawnee and to trust the one man who hates her the most, Chief Little Owl Quick as the Wind.

Calico’s story will immerse you deeply into the world of the frontier Shawnee, where you will find characters at once surreal and totally believable. Bruning’s knowledge of Native American and colonial era language is captivating to read. Her understanding of the period clothing, habits, and lifestyle is evident as she weaves a tale that draws you in from the first chapter and leaves you hungry for more.

This excerpt is taken from Allison's book Calico, page 284.

Little Owl moved closer to her. He grabbed the side of her face with his right hand, tilted his head, and gently kissed her on the lips. "I love you, nie-wah. Don't ever forget that," he whispered as he pulled his lips away. Little Owl rose from over her and walked away. Calico watched her husband return to the fire. She glanced at the items. He had worked so hard to be with her and all she ever did was turn him away. Why? Why was she so stupid?! Calico removed the long silver-stranded earrings that Creek had given her when she had become a woman, then placed them on the blanket. She picked up Little Owl's earrings. Beads of white and brown randomly lay on the silver strands. An owl feather and a dove feather sat nestled behind the stands on each earring. She smiled, tracing her hand down the feathers. An owl and dove joined together, side by side. It was their story. She placed the earrings in her ears. Calico pressed her hand on the blanket over her chest and leaned over the blanket. "What's in the bag?" she asked, reaching for it.
"Chocolate."
Calico gasped as she jerked her head upright. "You're joking."
"No. I traded all the alcohol I had left for that bag. You love French hot chocolate."
"You remember?"
"How could I forget, nie-wah. You say you are Shawnee but there are some parts of your white life, such as the white man's chocolate, you will never give up. "
"Little Owl, have you ever tasted this stuff?"
"No, but I know it cost me a lot."
"It is the most delicious drink you will ever taste in your life! Do you have a pot to make it in? Do you even know how to make it?"
Little Owl chuckled. He rose from beside the fire and walked to a basket. Little Owl pulled out a copper pot and two porcelain cups decorated with delicate blue flowers. "Oh, French cups too," she proclaimed with excitement.

The Executive Director of the Kentucky Young Writers Connection, a non-profit agency of writers who promote young authors throughout the state of Kentucky. Allison originally hails from Marion, Ohio. Her father, Roland Irving Bruning, was the son of German immigrants who came to the United States at the turn of the 20th century. Her mother's family had been in the United States since the 17th century. Allison is a member of the Peter Foree Chapter of the  Daughters of American Revolution. Her linage traces to Private Reuben Messenger of Connecticut. Her educational background includes a BA in Theater Arts with a minor in Anthropology and a Texas Elementary Teaching certificate. Both acquired at Sul Ross State University in Alpine, Texas. Allison received National Honor Society memberships in both Theater Arts and Communication. Allison was also honored her sophomore year with admission into the All American Scholars register. She holds graduate hours in Cultural Anthropology and Education. In 2007 she was named Who's Who Among America's Educators. She is also the recipient of the Girl Scout Silver and Gold Awards.

Allison lives with her husband in Kentucky.  Calico is book one from the series, Children of the Shawnee. It is available at http://amzn.to/JSNRpm. She is currently working on the sequel, Rose.  She is also working on another series, The Secret Heritage, which traces the life of her great great grandmother at the turn of the 20th century in Ohio. Allison's interest includes Ohio Valley history, anthropology, travel, culture, history, camping, hiking, backpacking, spending time with her family and genealogy. Her genres include historical fiction, paranormal, romance, and suspense.
You can reach her at:
Facebook: http://on.fb.me/xxJ249
Facebook Fan Page http://on.fb.me/plvkxJ
Twitter: @emeraldkell
Blog: http://bit.ly/whteQI
Goodreads:http://www.goodreads.com/author/show/5164664.Allison_Bruning
--
Allison Bruning
Author of "Calico" Book One (Children of the Shawnee series)
http://www.amazon.com/Calico-Children-Shawnee-ebook/dp/B007Z8V982/ref=sr_1_2?ie=UTF8&qid=1335908293&sr=8-2