The Progression (and Obsession) of Success

I'd like to thank Mr. Bruce Blake for stopping by and being my guest this week on our virtual blog tour. After reading please comment below on how you measure your success, Bruce and I love comments! Thank you!


The Progression (and Obsession) of Success

success – noun (suh k-ses):
1.      the favourable or prosperous termination of attempts or endeavours
2.      the attainment of wealth, position, honours, or the like

We all measure success in different ways; some by achievement, some by financial gain, some simply by the way we feel.  With the Olympics underway, we see success attained on a daily basis, but even at that high level of athletics, what each competitor sees as success is different. Does every athlete in London this summer expect to win gold? Or are there some who have already achieved their success simply by getting there?

Even an elite athlete like Usain Bolt (tell me people wouldn't look at my sideways if I wrote a novel involving the fastest man in the world and I named him Bolt!) went through a progression of success.  While nothing less than gold is good enough for him now, it likely wasn't always that way. When a young Bolt took to the track for the first time, did he have Olympic gold in his eyes? No, he was happy to qualify in those first few races.

I still remember the day I reached what I'd consider my first success: completing my first novel. I cried. Yeah, it's true, I actually shed tears. Not very manly, I know, but I hear the woman-folk dig a man in touch with his sensitive side. After that first time, finishing a novel has become an expectation for me, and with each novel, I expect the finished product to be better. Then came publication, then sales. When once selling one copy was enough, now I reached the #2 spot in my novel's sub-category for a short period, climbed into the top 100 of its main category, and broke the top 5000 overall. And that's where progression starts to become obsession. Every novel leads to another, every sale makes you want more. With each level of success, there is another level beyond. With each race won, there is another, bigger race to be run.

The measuring stick of success grows ever longer. 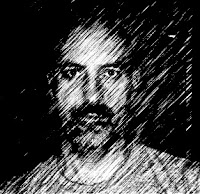 Biography
Bruce Blake lives on Vancouver Island in British Columbia, Canada. When pressing issues like shovelling snow and building igloos don't take up his spare time, Bruce can be found taking the dog sled to the nearest coffee shop to work on his short stories and novels.
Actually, Victoria, B.C. is only a couple hours north of Seattle, Wash., where more rain is seen than snow. Since snow isn't really a pressing issue, Bruce spends more time trying to remember to leave the "u" out of words like "colour" and "neighbour" then he does shovelling. The father of two, Bruce is also the trophy husband of burlesque diva Miss Rosie Bitts.
Bruce has been writing since grade school but it wasn't until five years ago he set his sights on becoming a full-time writer. Since then, his first short story, "Another Man's Shoes" was published in the Winter 2008 edition of Cemetery Moon, another short, "Yardwork", was made into a podcast in Oct., 2011 by Pseudopod and his first Icarus Fell novel, "On Unfaithful Wings", was published to Kindle in Dec., 2011. The second Icarus Fell novel, “All Who Wander Are Lost”, was released in July, 2012, with the first book in the four-part “Khirro's Journey” epic fantasy coming soon. He has plans for at least three more Icarus novels, several stand alones, and a possible YA fantasy co-written with his eleven-year-old daughter.