Lethal Obession (a tale of sex and bondage), by Shandra Miller 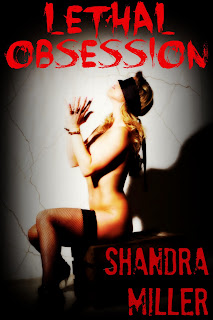 Angela Martin is like everyone else. She wants acceptance. Love. Passion. For five years she’s lived with the pain of knowing her husband cheats on her. She’s dealt with the heart-rending rejection by rebuilding her life around her work, becoming the first woman detective in the history of the Moose Creek, N.C., police department.
Then she stumbles upon him. A man who reawakens desire, who makes her feel more alive than she believed possible by pulling her into a world of bondage and dominance, devotion and trust taken to a new level, fear mingling with desire, a craving stronger than any drug.
Soon women start turning up dead in Moose Creek, bound and tortured, tied in ways that Angela finds startling familiar. Angela’s heart tells her that her newfound love cannot be the killer, her detective instincts tell her otherwise, and her obsession with this new lifestyle draws her back to him, even at the risk of her life.


LETHAL OBSESSION is a tale of sex and bondage, love and fear, desire and suspicion, with an ending that will leave you breathless, craving more.

An excerpt from LETHAL OBSESSION:

I am going to die.
Because I’m stupid.
That was the final lucid thought Angela was able to form before emotion replaced rational thinking. His hands – gentle yet deliberate in the way they had already worked the rest of her clothing from her body – unfastened first one strap that hung over her shoulders, then the other, and Angela felt her face flush as the chemise fell, leaving her nude.
She heard a whimper as the hot sting of leather kissed her buttocks, then the whimper grew to a muffled cry with the second and third strike, and Angela realized it was her own voice she was hearing, what little voice she could form through the gag.
Her body trembled at a fourth and fifth strike. Fear and adrenaline coursed through her body, and Angela moaned. Embarrassment competed with fear, embarrassment at being naked and vulnerable, and at the realization her body was responding to his actions, that she could no longer control herself, with each lash from the belt arousal grew; fear as the realization dawned on her, not rationally but in some deep, visceral way, that she was helpless and alone, at the mercy of a stranger who clearly had painful intentions for her.
Then it all went away, replaced by the hard sensation of ice, first against her right nipple, then her left. Angela cried out at the cold, her body jerking, but the sound was muffled, and she moved little, with her arms stretched overhead, wrists bound, snuggly held in place by…by what she wasn’t sure, with her vision nothing more than blackness behind a blindfold.
She turned her body away from the cold as much as she could, and Angela felt another sharp sting of leather across her buttocks.
“You will stand still.”
The voice, little more than a whisper, was firm and even. No anger, no frustration, just a simple command.
Again the ice, but Angela held her footing, though her body trembled in spite of her attempt at remaining perfectly still. The cold pressed against her, hard, and then she felt the ice slipping around the nipple, making larger and larger circles outward, spiraling across her breasts.
As suddenly as the ice had come, it was gone. In its place she felt his lips...kissing her right nipple, gently at first, ever so softly. A mix of sensations rolled through her body – the air against her left nipple, still wet from the ice, almost stinging cold, while his kisses brought warmth to her right nipple. Despite the embarrassment, the fear, Angela felt herself growing wetter than she could ever remember as his hands caressed her hips. She moaned, instinctively arched her hips forward and felt teeth clamp down on her nipple. Not hard enough to be a bite, but with enough force to hurt.
She whimpered and, again acting on instinct, tried pulling away, which served to elicit even more pain before he released her nipple.
“You are not very compliant,” he said. As before his voice was little more than a whisper, followed by the sound of leather slicing through the air and the sensation of it slapping hard across her butt, wrapping around her body, the tip of the belt kissing her, there, with pain. 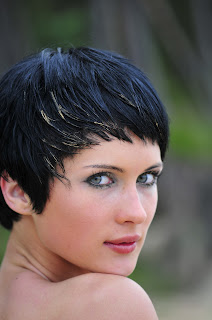 Shandra is a mid-western gal who left home at 16 and never looked back. Eventually she made her way to Florida, worked for three years as a carnie and another three with a circus -- yes, a real, live, honest-to-god circus. Traveled all through the South and Mid-Atlantic, town to town, on the road eight months at a time.
Now she’s a small-town office girl, filing papers, answering the phone. She doesn’t own a cell phone or a TV, she takes long walks at night, lies in the grass in the day time and watches the clouds go by, and she writes erotica. Blazing hot erotica. And mystery stories dripping with lust, sex and suspense.

You can follow Shandra at Shandra's Blog and at Facebook
You can also join her March Lethal Obsession blog tour at Facebook Event -- There you’ll find contests and giveaways, and a chance at winning a $20 Amazon gift card and an e-copy of all of her published fiction! Details on the giveaways will be posted soon.