Brie Embraces the Heart of Submission: After Graduation by Red Phoenix Blog Tour

Brie Embraces the Heart of Submission: After Graduation by Red Phoenix Blog Tour

Book Description:
On the night of graduation, Brie Bennett offered her collar to the man who’d won her devotion during her time at the Submissive Training Center.

The intimate encounters Brie enjoys with her new Master are hot and deliciously challenging. On the flipside, despite her newly acquired skills, she discovers that being a sub also requires maturity, intelligence and willing sacrifice.

Her Master has a tragic past that he has kept hidden. She is unaware that someone is waiting in the wings, plotting to return and rip his world apart. Brie has troubles of her own, including an obsessive Dom who won’t let her go, parents who refuse to accept her new lifestyle, and a film that is struggling to see the light of day.

Brie’s journey with her Master brings both sweet ecstasy and unbearable pain. Friendships deepen and love grows, even as her life begins to crumble around her. To survive, Brie will need the strength of a love that binds her securely—heart and soul.

You can purchase, Brie Embraces the Heart of Submission: After Graduation HERE.

Chasing Cars by Snow Patrol    http://www.youtube.com/watch?v=GemKqzILV4w
This song inspired me whenever I wrote Tono’s scenes. His gentle spirit brings Brie peace, his rope brings her great pleasure. Tono is content just to slow down and “be” with Brie. Unlike Faelan, he respects the sanctity of the collar but his is a love that will never die. 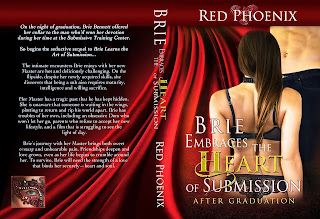 “Toriko…” Tono called from the other room.
The sound of a lone flute floated in the air, letting her know what was about to take place. She took a deep breath before rejoining him. Brie bit her lip when she saw Tono sitting on the mat in his black kimono, with jute in his hand.
She joined him on the mat, kneeling before him. Her stomach jumped when his fingers made contact with her skin. Without asking, he took her wrist and wrapped the jute around it.
“Observe what I do, toriko. I want you to understand the intricacies of the bindings. These are basic, but can still be used for more complicated designs.”
Her heart rate sped up as she watched him bind one wrist to the other. He then began a pattern, weaving the rope between each of her fingers, caressing her skin sensually with the jute. She longed to close her eyes and give in to the feeling as she listened to the lone flute call her, but it was not what he had asked of her.
When Tono was done, he held up her hands so she could see the intricate work before he untied it and bound her again so that she could observe it a second time. He left her wrists bound when he was finished, starting on her legs next.
He told her to sit with her ankles together and, using a new rope, proceeded to bind them together. She watched in fascination as he tugged and pulled at the rope, creating tight yet beautiful bonds with simple knots. He untied it, and repeated the procedure for her benefit.
Tono then got up and retrieved something from the bedroom before kneeling behind her. “Breathe with me, toriko.” His words brought a smile to her lips. Brie closed her eyes, embracing the sensual feeling of the bindings as she matched the rhythm of his breaths. He explored her skin with his hands while lightly kissing the back of her neck. “I will bring the release you need…”

There is a special Sir’s POV from the Collaring Ceremony Red has written and is on the following blogs in this order: 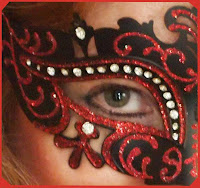 Red Phoenix is an award-winning indie author who began her writing career in December of 2011. She caught the imagination of readers with her little novelette, Brie’s First Day of Submissive Training, which was published in March, 2012. Since then, fans have been riding the Brie wave with the sociable author. In October of the same year, Red published the wildly popular eBook serial into novel form, Brie Learns the Art of Submission. She recently finished Brie’s continuing journey in the book titled, Brie Embraces the Heart of Submission: After Graduation. The epic novel, 542 pages of seductive fun, was published the end of October, 2013.
Posted by Laci at 9:00 AM