Today at Laci's Place, I have JESS HUNTER – Author of FOR A HERO who apparently has met the girl of his dreams! Comment below for a chance of any one of Sable & Jess Hunter's ebooks - your choice.
This is an open letter to the girl who is his inspiration…….. 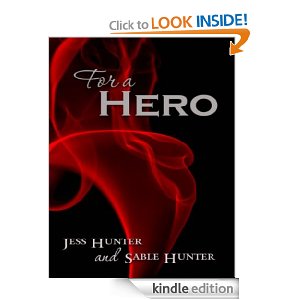 Here’s an excerpt from FOR A HERO
And the buylink: Amazon

David’s hands held on to her as if he’d never let her go. He created an unbreakable bond between them. So perfect was his connection to her that their breaths escaped simultaneously.
They slept for a while, content to just be in each other’s arms.
Slowly, Jenna awoke, looking up and around. There she lay, in his fortress, where only his most trusted and loved ones enter.
It was December 23rd. Even though Santa hadn’t left yet, this was the best present she could have asked for.
“Jenna.”
“Yes?”
“This isn’t the most perfect time, but I am feeling it right now. If I don’t let it out and tell you, I am going to burst.” David sat up; the radical change in body position mirrored his tone in magnitude.
Jenna rose to meet him in response. “What is it?”
“You have shown me that I don’t have to keep my walls up. You have shown me that I don’t need to keep searching for something else. If my mom and dad were alive, I am positive they would love you. They would be so proud of me if I brought you home.”
David’s voice caught a bit. Jenna’s eyes misted. “Thank you, David.”
“I want to spend the rest of my life with you.” He looked at her with sincere, hooded, fervent eyes. He took her hands in his and held them tightly against his chest, like he needed them there to breathe. “I want to marry you.”
Jenna gasped. The air stopped coming in and she didn’t even realize it. This was it. It could be the happiest day of her life, or the day she walked away from the best thing that had ever happened to her. Either way, the dreaded choice, that hung over her head like a macabre guillotine, had finally reached her waiting neck.
Jenna looked at him. She couldn’t deny it any longer. She loved him. With every piece of her heart, she loved him. They could work out the rest, right? She could talk to him about his job and his life; she could ensure that things would work out. She could be selfish just this once.
She opened her mouth, she was mostly sure that a strong ‘yes’ would come assertively out. However, David continued before she could say it.
“Say yes, and I will resign as the Fire Chief first thing. We can get a home together. We can start a farm in south Austin. We’ll have kids and raise corgi puppies together. It will be magical.”
Damn! He had to go and do it. He had to. Life can be a cruel bitch. The ‘yes’ came out, not as a word, but as a pathetic croak. Jenna shut her mouth, terrified of what to say. She couldn’t take him away from the city, away from his calling. Even if he hadn’t strolled into her life, and filled her heart with love and desire, she would still have understood how important and wonderful he was, just like the rest of Austin did.
But did she have the strength to say no? Could she deny herself the one thing she wanted most in the whole world?
Her hesitation was more obvious than she hoped it would be. David could see her trepidation written all over her beautiful face. Fear and dismay clutched his heart, squeezing it like a vise, and with an other-worldly effort, he pushed the panic aside and showed her none of it. His voice was as placid as a frozen river. “Don’t answer.” He couldn’t bear to hear anything but yes, he wasn’t ready. Damn him for not preparing for it. “Take your time to think about it.”
David got out of bed. He tried not to pace. He just stood and looked into nothing. After a moment, he spoke again. “I want you to be sure. It’s a big choice, so please think carefully.”
The clock was ticking on his resolve. Weakness could rupture at any moment. He had to get away. He started to put his clothes on quickly. “If you say yes, I will take you to get the ring tomorrow. If not, we will decide what to do after.” He went to the door and opened it before she had a chance to say anything. “Make yourself at home here. Unfortunately, I have to go to the Fire Hall for some business. I lo-” he stopped himself, closing his eyes in pain, he said one simple word.  “Bye.”
He was gone. Jenna lay in bed, still ravished from their love-making, alone and terrified. What had she done? She curled up in a fetal position and wept.

David had to get away. Had he stayed just a few moments longer, he would have embraced her and let this tsunami of emotion out that had been building for weeks. He decided to pour himself into his work for the evening. He must find whoever was behind this terrible game he was being forced to play.
He rushed to the Hall. With all the tricks he knew, he focused on the task at hand. He put everything aside. Blaine’s call at his mother’s was concerned but not informative. His friend took the news that Hank had handed him the envelope with a salty distrust. Although David defended him to a fault, Blaine’s final words hit him hard.
“Watch out.”
David sat behind the desk, in complete darkness. The lights of the city sliced through the room, tearing into the slits of the window blinds. He watched out, indeed. He watched out for himself. He watched out for his mother and for Jenna. They were as safe as he could make them. Blaine said ‘watch out’ as if David wouldn’t think to do that.
His heart pumped focus and presence into his mind. Would Jenna even want to be his to protect? Nobody knew where David’s loft was; they had never seen it or been in. Jenna was safe there, as long as she stayed.
No, David. Don’t think about the proposal. Focus. Solve the riddle.
He watched out.
The thought lingered. He wondered who out there could be watching out for him.

Jenna closed her eyes. Then she opened them. No. He was still gone. This wasn’t a horrible dream. It was a depressing, horrifying reality.
What was wrong with her? Why couldn’t she say yes? Oh yeah. Because he would be quitting his job and leaving the city in need, for her. Her mind reeled.
She fell down to the bed and buried her face in his firm, luxurious pillow. It offered next to no comfort to her. She began to cry.
Jenna realized she needed to talk to someone, if only she knew of a person who would listen and help her. She grabbed her phone and filtered through the contacts.
Not Maggie, she was in Dallas. Not Miranda, she wouldn’t understand. Not Ben, that’s a joke.
Then she found someone. The presence of her name in her phone number log was a refreshing reminder. David’s mom. She had given her comfort once before. She knew David better than anyone.
Jenna’s sniffles raised a hopeful pitch. She dressed quickly, got on the bus, and made the call.

Answers didn’t come to him in the night, only more questions, more worries, more fears. Some of David’s resolve began to grow again; his solitude healed his spirit, he began to recuperate slowly. The tension in his back was incredible; his flexed lumbar muscles pushed the back of the chair to an unnatural angle. He made fists with his hands and squeezed. He tunneled his thoughts, he focused his mind. David detached and hardened himself. He was ready. He finally felt it. He was ready for whatever it was. Bring it on.
As if his thoughts summoned it, the phone started to ring.
“Hello?”
Blaine answered. “I figured you’d be up. You sound worried.”
“Have you found anything?”
“Yes, but your worry sounds heavier than just anticipation. What happened?”
Blaine’s perceptiveness never ceased to amaze him. “I don’t know if I am more nervous about what you discovered or Jenna. I proposed to her tonight, she didn’t have an answer right away, so I gave her some time to think about it.”
Blaine responded with his normal amount of supportive sarcasm.  “What? You just met her a week and a half ago. What do you think this is a Sable Hunter novel?” 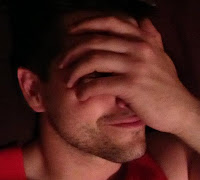 THANKS FOR READING!!!!
JESS

Thanks for stopping by Jess, it was great to have you! Hope you come by again, and have fun Saturday ;)
Posted by Laci at 5:05 PM