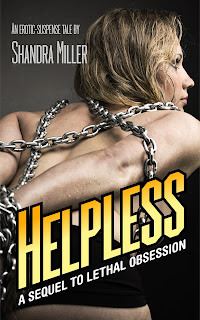 When she finally begins to emerge from that darkness, to reclaim parts of her life and career, the killer returns, only this time he hits closer to home, and Detective Martin stands to lose more than ever.
*****

An excerpt from HELPLESS:
"More."

Her cry was met with a slap across the face. Not hard, but sharp enough to sting.

He laughed, a quiet whisper of a laugh, then the sound of the leather strap slicing through the air followed, cut off by the snap of the leather against her ass.

Angela flinched at the contact, but could do little more. Her arms stretched overhead, wrists tied by a rope attached to the ceiling. Her legs were wide, a spreader bar between her ankles, each end lashed to those ankles so that she was unable to move. Her vision was blotted out by a black cloth tied around her head.

The leather kissed her skin again and again. She moaned from the pain, from the arousal, trying desperately to close her legs tight, to bring herself to climax.

"No you don’t," he whispered before shoving a piece of ice into her cunt.

She gasped, her heart racing even harder now.

"You belong to me," he whispered, hand tracing the contours of her bare breasts as he spoke.

"Your body, your sex…" he worked the ice back and forth. "Even your existence." His hand pulled away – the ice mercifully fell out, then she felt the pull of a rope tightening around her neck. He pulled until her air was nearly cut off, his other hand continuing to caress her breasts, fingers lightly rolling first one nipple, then the other.

"Ple…ase…" she rasped, fighting for breath.

Her plea was cut off by his lips, pressing hard against hers, tongue plunging deep in her mouth.
She tried breathing through her nose, but couldn't catch her breath. Angela struggled, but was unable to move. Even blindfolded pinpricks of light began bursting in her vision, she felt light-headed.

Helpless, an erotica-suspense novel by Shandra Miller, is the sequel to Lethal Obsession. Helpless will be available for download to Kindle on Aug. 15, and available for Nook and for all formats at Smashwords shortly thereafter.

Lethal Obsession is available at:

To keep up with Shandra's writing and publishing schedule, visit her website athttp://shandramillerwriter.blogspot.com/