Seal The Deal, by JoAnne Kenrick 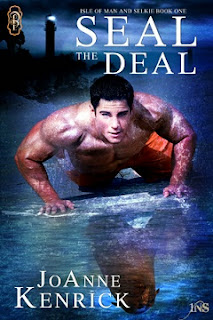 After being ditched at the altar, Finn Kneale isolates himself at Port St. Mary’s magnificent lighthouse. A violent storm ravishes the coastline, pitching the maritime tower into the Irish sea and transforming Finn into a seal. Carefree at first, he soon longs to walk as a man again. When leap year arrives, bathing land and sea in magic, Finn temporarily regains his human form. If he can’t find his soul mate in twenty-four hours, he’ll be back to cavorting among the waves.

Anne Ward—resident midwife and newcomer to Port St. Mary, Isle of Man—guards some wild secrets of her own while avoiding entanglements with married doctors. A believer in fate, she seeks out
Madame Eve’s exclusive agency to help find her destined mate. 1Night Stand matches these two lonely souls. But will their extraordinary date allow Finn and Anne to open their hearts to magical possibilities and Seal the Deal?

His stomach muscles pulled taut and lust pulsed through his groin, slamming the need home. So long he’d waited. His breeks grew tight, bringing attention to what he wanted—needed with growing desperation. He had to have her.
Now.
Finn yanked her in, closing all distance between them, and swept his tongue over hers. His swollen shaft pressed against her. The hair on his nape prickled. He wasn’t sure what excited him more, the prospect of making love to her, of having skin to skin contact, or her ability to end his curse.
He thrust forward, groaning.
“Slow down.” She panted and shoved, palms flat against his chest, but he stood firm and she stumbled back a few steps, landing on the bed with her legs apart. She peered up at him from behind her tousled curls, her low gaze focused on his lips. Moonlight bounced from her locks, shimmering deep-red low-lights and reflecting a warm tint over her perfect complexion.
If this was how he’d spent the rest of his years, he couldn’t wait to get started, to see her naked. To feast upon her beauty as she walked down the aisle.
The temptress had said slow down, but her almond-shaped eyes and her pout begged him to keep trying. No retreat, this is it. Giving up is not an option.
A new found confidence rushed through him, and a grin broke free. Boundaries usually standing between him and pleasure were nowhere in sight, his desire to invoke their connection too strong to deny, to let his awkwardness get in the way. He dared to drop over her, caging her in and pushing her into the mattress. Hazel eyes held him captive. He couldn’t steal away if he wanted to.
###

JoAnne Kenrick is a multi-published author who writes both contemporaries and paranormals. Her Irish Kisses series earned her the title of a Bookstrand bestselling author, and contemporary romance bestselling author at ARe and Amazon. When JoAnne's not writing, she enjoys creating book adverts and crafting.

"Another magical read from JoAnne Kenrick. Passion, thrills, and romance, this book has it all. A must read!" ~ USA Today Bestselling Author, Marie Harte.

"JoAnne Kenrick transports her readers to that land between myth and reality where romance is all the magic you need. Don't miss your chance to visit!" ~ Heather Long, bestselling author of the Always a Marine series.

"Ms. Kenrick created a magical, romantic, and sexy world with vivid details that pull you in and make you beg for more. Seal the Deal is a wonderful, steamy addition to the 1Night Stand series and a must read." ~ Bestselling romance author, Lia Davis.
***
Posted by Laci at 12:01 AM