Today I have an odd guest author. The one and only Virginia Nelson is here at Laci’s Place. First I’d like to say thank you for stopping by Virginia. I can’t wait to check out your latest story. It sounds really, well...odd.

Thanks so much for having me on the blog today!

I’m a lot like the main character in my new release, Odd Stuff, a paranormal romantic comedy. Graceless heroines amuse me. Since I am more prone to mess things up in real life than to do them gracefully, the heroine who is flawed is one who I can really identify with.  In paranormal stories, usually the heroine does just the right thing at just the right moment and her powers are what they need to save the day.

I didn’t like that.  I wanted to create a character who didn’t always make the right choice and when she messed up, she had to figure out a way to fix it.  Janie was born from this, one of the most powerful creatures that go bump in the night and one of the least willing to be one of the ‘monsters.’ She only wants a normal life, with her daughter, and to recover from her recent divorce.

The paranormal world…doesn’t really cooperate with her plans.

Blurb: Janie Smith tumbles through the paranormal world making mistakes and not keeping her sharp tongue in check. Pretending to be normal is what she has spent her whole life perfecting. But when her best friend, a witch named Mia, gets tangled in a murder investigation, Janie tries to stick to her guns and solve it without any “extra” help, be it supernatural or sexual. The hitch is that Mia is suspected to have murdered a vampire...and how do you prove you haven't killed someone who has no pulse?

About the Author: Virginia Nelson spends her days chasing three very active kids around. When she is not doing this, or plotting taking over the world, she likes to write, play in the mud, drive far too fast and scream at inanimate objects. She can often be found listening to music that is far too loud and typing her next fantastic tale of blood, sex and random acts of ineptitude. Romance, in Ms. Nelson’s opinion, is not about riding off into the sunset on the back of a horse with the knight in shining armor— it is about riding the dragon. If the knight can keep up… well, that is love. 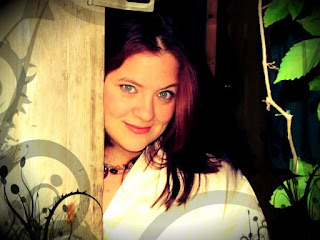