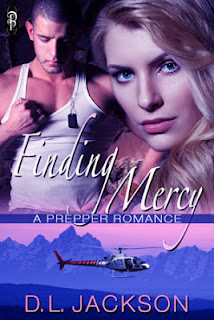 Today I have D.L. Jackson on my blog telling us about her newest Prepper Romance. Yes, you read that right, a "Prepper Romance". Read on with my guest, then you will understand...

Good morning. I’m here to tell you about my newest release, Finding Mercy.

About four months ago my publisher mentioned she was considering starting a Prepper line. It would be romance and about people who incorporate disaster preparedness into their daily routines. The idea intrigued me. In fact, it wouldn’t leave me alone. Within two days, an idea percolated and I was on the phone with her.
And then I told her about my home town.  Here’s the brief description I gave her.

Built in the 1942 to train Army pilots, Alliance Army Airfield didn’t remain around long. It was decommissioned in 1945, but it’s important to note that the downtown area of a small town three miles to the north west of the airfield is built on top of a massive bomb shelter. There is literally a shelter that takes up several square blocks under this town. The Secretary of War authorized the building in April of 1942. The workers who came in doubled the population of Alliance and an area on the east side of the town now utilizes the original cheaply built houses, “chimney town”, for senior housing. Many of the workers were Sioux from the Rosebud and Pine Ridge reservations, Mexicans from the Southwest, and African Americans from Wichita and Kansas City. Many of the Sioux remained in Alliance. A common family sir-name is Warbonnet.

The main street is brick and called Box Butte, the rest of the streets are poured concrete and extremely tidy. The kids in the town like to drive up and down the main drag on the weekend. This is called cruising the Butte. The sidewalks are poured concrete. Every so many feet you will find thick glass blocks, in grids about four by four each, making up windows that are about two foot by two foot. This lets light into the shelter below. A donut shop called Daylight Donuts, sits in the middle of main street and is a common gathering spot for locals to have morning coffee and a cream-filled pastry the coffee shop has named a Long John.  The older ranchers and farmers hang out there every morning and “shoot the bull.” A block up from that is the library, where kids often hang out front. Across the street is the Courthouse, a large white building with a stucco exterior. Behind it is the local police station and fire department.

In August for a week, the street is blocked off in an area that takes up about two blocks. A carnival and rides are set up. Western dances are common at this time with live outdoor bands. These events are most common during Frontier Days. They also have sidewalk sales, famer’s markets and outhouse races and other events around town, including mud volleyball at the old airfield, where the fire trucks come out and make the mud. The county fairground is out of town to the north. The fair takes place around the same time—beginning of August.

So, that being said, she was sold. From this brick and mortar foundation of the real town of Alliance Nebraska, I spun the world of Evans Point Wyoming, where survival is a priority and love blooms among a community of preppers.

This shelter led me to several what ifs. What if tornados level a small community, one like Alliance with an old shelter, mostly forgotten until disaster strikes. What if those that stay and rebuild, decide to refurbish the old shelter, so that they will be better prepared for future disasters.

About some of the characters in the Evans Point Mini-series:
Jake North—Sheriff. (I’m currently writing a story about this intriguing character)
Will Evans—A local rancher, whose family founded Evans Point. He is in his 80s and a Veteran of WWII
Anne Bessett—Runs the hydroponic greenhouse in the shelter.
Justin Redway—Missing hero hiding from the media outside of Evans Point. (Finding Mercy) Was a Combat Medic with the 10th Mountain Division and awarded the  Medal of Honor.
Mercy Evans—Anchorwoman for Cheyenne News station and Will Evans’s granddaughter. (Finding Mercy)
Grant T. Houston—Survivalist and author who lives outside Evans Point (Princess and the Prepper)
Princess Liliane Johanna Charlotte Helene zu Saxe-Melckenburghausen (Princess and the Prepper) Think the title says it all.
Maggie Farrell—Owner of a guest house in Evans Point
Orla Houston—Grant Houston’s mother.
James Houston—Grant’s brother.
Cassi Smith—Environmental purist who gets caught in the middle of a deal gone bad. (Falling For Water)
Ray Harris—FBI agent tracking down illegal gun smugglers. (Falling For Water)

Blurb for Finding Mercy:
You’ll die in three minutes without oxygen, three hours without shelter, three days without water and three weeks without food. But could you survive a lifetime with a broken heart?
Mercy Evans has come to Evans Point hoping to collect herself and find a way to resurrect her career as an anchorwoman for Cheyenne’s news station. Sergeant Justin Redway has come to Evans Point to try to forget his past and survive what he’s done.
When two worlds collide, one of a battle damaged veteran, the other of a desperate woman who will go to any extreme to get his story, sparks fly and old wounds open. When the chasm between the fated lovers widens, it just might be too big to cross.
One town, two lovers and a second chance at finding mercy.

It looked like the end of the world. Will Evans tightened his grip on Bear’s and Sadie’s leashes and tuned in for any cries for help. The fresh smell of rain mixed with the industrial stink of spilled fuel and the ozone from a nearby lightning strike pounded reality home.

Even though they’d merely begun, his bones ached. Fifteen years before, he would’ve torn through the wreckage and pulled out survivors without hesitation. Now, he could only look over the destruction and fight the tears that tugged on his eyes. The scene brought back another time he couldn’t stomach, when he’d seen the Grim Reaper rip a hole between life and death, as he’d done this day.

The storms had hit with ferocity, in the middle of the night, without warning. The roaring of the beast had woken some, but not all. Those alerted had rushed for cover in their basements and cellars and now searched for those who were not as lucky. This was all that remained of the downtown after six tornadoes had torn through Evans Point. In all his eighty-four years, Will had seen only one other battlefield like it.
He swallowed and searched his soul for courage. There would be bodies among the rubble, but hopefully, there would also be living. He had to believe to continue, even though he found his faith tested.

So much carnage. Scanning the brightening horizon, he took in the destruction. Brick buildings were blown apart. Vehicles lay on their rooftops, dripping gasoline and other fluids. Even a pickup had been skewered on a flagpole like one of the carousel horses he’d ridden as a child at the fairground. A  toy truck lay at his feet, its red paint bright and clean like it was fresh from the box.

His gaze shifted to the left. Someone’s farm equipment sat on top of a local bridal shop. The five-hundred-thousand-dollar harvester would have to come down in pieces, which meant it would remain there for a while. No one would be able to get a crane into the area for months. It all seemed so overwhelming, and he didn’t have a clue where to start.

But his dogs did.

“All right, we got work to do.” Will squeezed the hooks with his gnarled fingers, unclipping Bear and Sadie, letting them do what they did best. Since he’d retired, he’d taken up breeding, raising, and training the Caucasian Shepherds. The dogs originally belonged to a friend who had worked search and rescue  in Alaska, but when he’d retired and moved to Florida, he hadn’t wanted to drag the double-coated dogs to Miami, where they’d suffer from the heat.

Not that Wyoming didn’t have hot summers; it did, but they were shorter. When Will had taken the pair on, he’d discovered they made great cattle dogs, and why not? The Caucasian Mountain Shepherds were herding dogs, highly intelligent, possessing giant personalities to go with their enormous size. And the bonus? Mountain lions and wolves thought twice about going after his stock.

Bear barked and dug at a pile of debris that led to a basement entrance of an old bomb shelter under the downtown area. Will picked his way around the rubble, careful where he stepped.

The glass blocks embedded in the sidewalk, part of the old reinforced structure the Army had left behind in the forties, were still intact, and the structure below hadn’t collapsed. An idea woke in his head. Why hadn’t they used it before?

“Hey, over here,” he called out to a couple of firefighters as he tossed a two-by-four to the side. He wouldn’t be much help lifting the wreckage away, but he’d do what he could, and what he could do was get everyone together and make sure this didn’t happen again. Those who lost their lives here would be the last to die because they hadn’t been prepared.

So, the day after doomsday, I hope you’ll check out my newest release. I’ll have the buy links up on my website www.authordljackson.com. If you’re interested in writing in the Prepper line for Decadent, please check out their site and submission requirements.

Thanks for stopping by,
D L Jackson
Posted by Laci at 11:30 PM