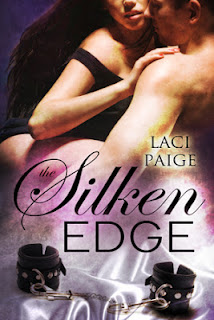 
Kristy jumped at the sound of Steven’s bedroom door slamming shut, and she took a deep relaxing breath.
“Are you frightened?” Sherry’s green eyes were wide peeking out from her auburn bangs.
“No. That was fuckin’ hot.” She fanned herself with her hand. “I’ve never seen that side of him before. So in charge. So demanding.” Her insides clenched in need. Must be the wine.
Sherry narrowed her eyes at her long time friend, and then they popped open. “I knew it. You’re submissive!”
“Oh, cut it with that crap. I don’t want to hear any more about how you and your Dom are forever happy with your arrangement. It’s too weird for me.” She averted her gaze and focused on her wine glass, swirling the liquid around inside. “Nice collar by the way.”
She looked up just in time to see Sherry flinch at the mention and reach up to stroke the petite choker around her neck. “H-how did you know?”