I'd like to thank Joseph Eastwood for being my guest today! Joseph and I are participating in the Tasha Turner Coaching Virtual Blog Tour, and we are only half way through, so I hope you continue to follow us for the rest of the tour.

Today's post is a little flash fiction based on a photo promt by Joseph... 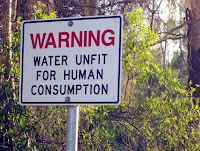 He didn’t even wait for self-control to kick in as he shoved his head into the water and started to lap it up, then whipping his head out and gasping for a breath. It had been a while; you could say that, since he’d had a drink of fresh water, but to his tongue, the water wasn’t at all fresh, it was stagnant.
“Come, Christy!” He waved over at his friend behind him. “I found—water,” he said between slurps.
“John. No!”
“It’s fine, it’s clean.”
Christy glanced up at the sign above John, it read, ‘WARNING: Water unfit for human consumption’, she gasped and glanced back down at John, he’d opened up an empty bottle and started to fill it with the water.
“John, stop drinking the water. It’s not been treated yet!”
John didn’t stop, he didn’t even turn around to acknowledge that he’d heard her. He just licked his lips and then started to drink the water from the bottle.
Christy brought a hand up to her face and touched her lips. They were hard and dry; she desperately needed water, and either way she was going to die, through dehydration, or what looks like poisonous water. “John,” she said, her voice strained and whiney.
“What!”
“The water hasn’t been treated,” she said, pushing a hand up against her stomach as it started to rumble. “And we need to get fresh water, and something to eat.”
John turned around, the whites of his eyes were now red and as he wiped at them, tears poured down his cheeks. “I’m fine, just drink some water, it will make you feel all better,” he said, gritting his teeth and almost punching himself in his stomach at the pang of pain shooting upward through to his chest.
“Oh, god. No! You can’t do this to me, everyone else has gone, you can’t leave me as well,” she said, kneeling beside him and looking into his eyes.
“I’m not, I’m sorry Christy. I’m not going to die,” he said, the pupils in his eyes broke, and leaked open, turning his eyes black.
He gripped Christy by the neck, and with a pop, he snapped her neck. Her head flopped into his hands and then her whole body fell limp over him. He tore at her skin, peeling pack until he was at the meat, and then he started to pull at the muscle, scoffing on her remains, just like he had with the rest of the group.

Joseph Eastwood is the eldest of five siblings. He lives and grew up in Lancaster, England, where he also attends the University of Cumbria, studying English Literature and Creative Writing.

He has always had a giant creative connection in his life, from drawing and writing to having an eclectic taste in music and reading a wide range of books, which he hopes reflects in his own writing. He also loves watching sci-fi, supernatural and fantasy based TV shows and films. Among some of his favourites are Supernatural, The Vampire Diaries and True Blood. As well as those he loves dramas, like The Good Wife and Desperate Housewives.

Joseph is either busy doing edits and writing or trying to get some university work done. He lives for creativity, striving to be different and thinking up new hoops for his characters to jump through. 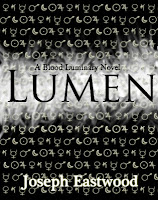 About Lumen by Joseph Eastwood

Lumen is the first in the four-part Blood Luminary series following the characters, Daniel Satoria, Jac Lister and Mia Crosgrove.

Daniel, like all other adolescents on Templar Island is going through the final transition that will allow him to manipulate the bonds of energy and do more than just tamper with his own biological form.

After a near-death experience he is accepted into Croft's Academy, the only private school on the island and for someone like Daniel to gain access to such teaching is a privilege, and they won’t let him forget it. He tries to fit in, but that’s when things take a turn for the worst, and everything he once knew can’t be possible any more. He doesn't know who to trust or what to believe.

SOON TO BE RELEASED!
Add to Goodreads: http://www.goodreads.com/book/show/13219801-lumen